skip to main | skip to sidebar

Roland made his final trip to the vet on Thurs morning. He had lost 6 lbs in the last 2 months and his shoulder and hip bones were sticking out. He could barely stand and was limping on both a front foot and a rear foot due to the onycodystrophy. His fecal incontinence was almost daily and his limited mobility made it worse. While it's always sad to lose such a special dog, he had put up with so much for so long.

We hope that his struggles with mega-esophagus help other dogs and their families deal with this devastating disease. He lived 2 years and 2 months from the first symptom and never had pneumonia, so we must have been doing something right or were incredibly lucky. If you are new to this blog, please read from the beginning.
Posted by WhippetTX at 5:12 PM No comments:

Roland is noticeably worse the past few weeks. He's falling frequently and even fell off the bed one night. His rear end is failing him. I think it's a combination of the malnutrition and loss of muscle mass and strength from the megaesophagus and the old greyhound rear end. He's also having trouble with bowel control. He doesn't seem to know that he's about to have a bowel movement until it starts. Then he runs towards the door pooping along the way. He's even pooped in his sleep. Life in our household has really become a mess - blurping and pooping dog in the house who doesn't have good control of his body. I think we're in the last few weeks, but he's surprised us before by bouncing back - so we wait and hope that we know when the time is right.
Posted by WhippetTX at 10:02 PM No comments:

It's nearly the middle of Jan and we're still hanging in there. Roland's rear is getting weaker and it looks like he's lost weight. I'm toying with taking him to the vet tomorrow (we are off work for MLK Day) to weigh him. His blurping seems to be about the same and he hasn't had one of those terrible times for several weeks now. If he makes it to March 10th, he'll be 12 years old - a reasonable age for a large male greyhound. He really just sleeps most of the time now and he always was good at simply hanging out. He has little overall strength and has lost so much muscle mass. He sits like a puppy now - rocked back on his butt - and his whole rear end quivers when he sits. He's also gotten very short with our whippet.

He's on the same doses of his medications. Over the holidays, I fed him about 4 small meals a day - basically whenever he was up and around and looked hungry. He does eat well for the most part. Most of his life he's been a very picky eater, so I guess the disease is making him hungry.
Posted by WhippetTX at 4:53 PM 1 comment: 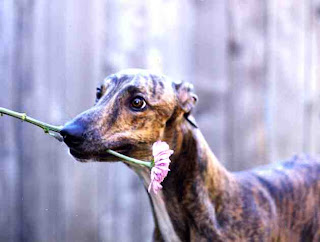 Happened to be at a nearby PetSmart when the local GPA group was there. Always nice to visit with the greyhounds and their owners. This is not the first time that we have meet some of these folks. There were 2 large male greyhounds there - very sweet dogs.

Got home and the difference between the males we met and Roland was scary. Roland's getting so skinny. His shoulder blades are prominent and his hip bones stick up. He looks alot like a puppy that hasn't filled out. The last couple of days everything he has eaten has come back up and he acts like he's constantly hungry. How much longer can this go on? Other than being hungry, he rarely seems in pain or very distressed. So, we wait........
Posted by WhippetTX at 8:37 PM No comments: 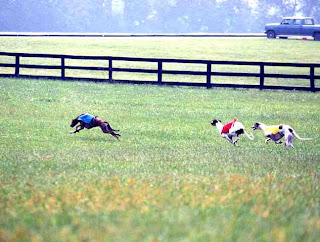 Photo is from the Greyhound Nationals in Lexington KY. Roland is the one with the blue blanket out in front and NO he was not given a head start. This photo was about 4 strides into the course.

Christmas is this week. As we put up our tree and hung a special greyhound ornament, we noted that this is probably the last Christmas that Roland will be with us. If he makes it until March, he will be 12 years old. This is not bad for a large male greyhound, even if the last couple of years have not been the best.

Roland's doing about the same, although he's really started to lose weight. He's down to 81 lbs - from his adult weight of 94-96 lbs. He's clearly lost muscle in his shoulders and rear end and his hip bones are starting to be prominent. He's having issues seemingly related to a reduced immune system. He's had ear infections in both ears and what looks like a yeast infection on his skin on his belly and between his back legs. He gets a special shampoo to control it. So, we are treating symptoms that make him uncomfortable, but we're not able to do much about the underlying condition. His rear is quite weak and he's fallen several times when his feet have slipped. He even has trouble riding in the car. He can't seem to keep his balance comfortably and has to lie down. Since his favorite part of the car ride is looking out the window, lying down is not fun.

This has been such a difficult road, but Roland's been such a trouper. Merry Christmas to all and best wishes to all canines and their families for the coming year!
Posted by WhippetTX at 7:12 PM No comments:

Sept and still living with mega-esophagus 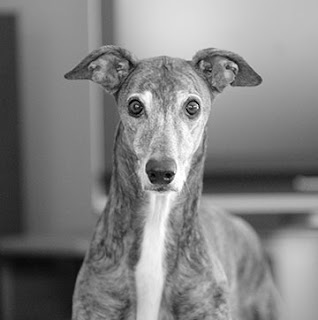 Can't believe that we've made it this far with Roland. Things are pretty much the same.

Last night we did have an issue with our other dog - Maggie the whippet. After 3 hours at the vet today, she is starting to get better, but she has idiopathic geriatric vestibular disease. At it's worst this morning, she wouldn't even try to stand. By late this afternoon she was trying to stand and walk, but still not interested in food or water. She did get 350 cc of subcutaneous fluid at the vet's office.

Roland's regimen has not changed except that we now give him 10 mg of bethanechol at every meal (3 times a day). He still has good days and bad days. Last night was a bad night. It was especially bad for the humans in the family because we had to take care of 2 sick dogs. Roland had one of his bad events where he blurps repeatedly and looks quite distressed. He has recovered from this one fairly quickly. He ate a little breakfast and most of his dinner. He also wants to know why his sister is getting the good stuff. I don't think she has ever been sicker than him and he certainly doesn't get it. I'll admit that he's gotten spoiled with this illness.
Posted by WhippetTX at 8:22 PM No comments: 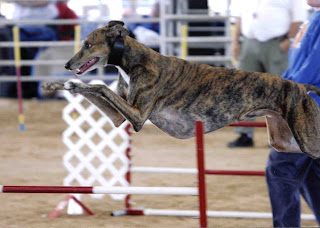 Photo is from his first agility trial at age 2.

I can't believe how long it's been since I posted an update. Things have been relatively stable - although gradually getting worse. Roland blurps nearly every day. He had 2 of the episodes where he blurps repeatedly over several hours within a 2 week period. We thought it might be the end, but he recovered back to baseline after the second event fairly quickly. Recently he went almost 2 days without blurping, but emptied pretty well tonight. He's clearly lost weight, but is generally hanging in there.
Posted by WhippetTX at 8:24 PM No comments: 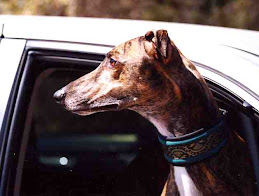